Painting the Past: A Graphic Reconstruction

Posted on September 29, 2010 by rubiconheritage

It is mid-afternoon yet it is pitch dark. The humid air is thick with smoke, sweat and steam. You are surrounded by naked people, crammed inside a leather tent – people are singing and laughing in party mood. Is it Granny sitting next to you or your cute cousin? You can’t tell. Someone mutters about needing fresh air, followed shortly by a burst of dazzling light and a cold gust as the door flap is opened, prompting a cacophony of shouts and raucous insults. Granny pats you fondly on the knee. Outside, the smell of wood smoke is strong, volunteers are taking turns tending the fire and maintaining the supply of hot stones for the steam – arguing about who gets to hold the special stick. 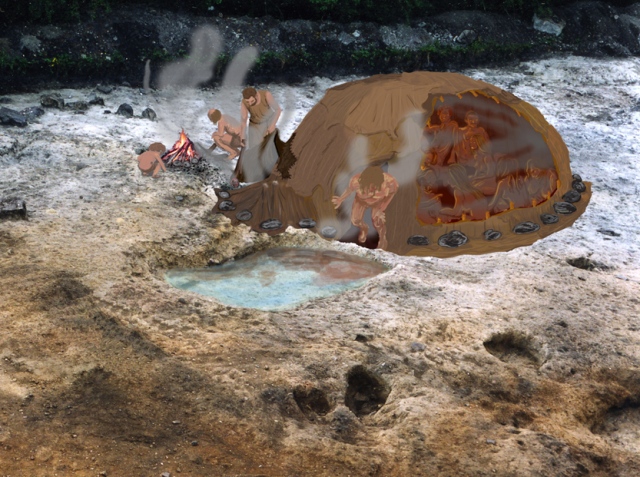 Reconstruction illustration of the Rathpatrick Sweat Lodge, from the N25 Waterford Bypass Scheme. By Jonski Millar

This image gives one possible interpretation of how the Bronze Age sweat-lodge, troughs and hearth from Rathpatrick, Site 40 (04E0318) on the N25 Waterford Bypass may have functioned. The reconstruction illustration was originally created for the site’s final report in 2006, but has had many other outings since – appearing in publications, exhibitions and lectures. An image takes on a life of its own once it is released into the ‘wild’, often moving well beyond the parameters of the original brief which caused it to exist in the first place.

Creating an effective reconstruction drawing involves a many-staged process. It starts with discussion between the site excavator/client and the illustrator and the creation of provisional sketches to decide which view-point, scale, extent etc gives the most suitable image.

A selection of digital 'thumbnails' - sketches to experiment with views and arrangements prior to spending time on a more serious draft.

The illustrator then studies the site archive and available documentary sources, reviews similar examples if any exist and may seek expert advice regarding current theory, before creating a more finalised layout and arrangement. This ‘final draft’ can then be circulated for peer review and may be passed to the client for their input before a final draft is completed. Once an image is offered up for mass consumption there is always the potential for a challenge to be made over interpretation – an image may have to be revised again to acknowledge an altered interpretation. This reconstruction was created using a series of overlays and digital painting effects within Adobe Photoshop software, with additional finishing added in Adobe Illustrator. The image background is a photograph taken following excavation. Digitized site plans, site sketches and other photographic source images were also used at various stages to create the final figure.

Jonski puts himself in the picture as 'man rolling stones with stick', original source material compared with an extract from the final version.

Reconstruction illustrations fulfill a variety of roles and have more than simple ‘entertainment value’. They can be employed as a means of testing hypotheses, a teaching aid, a means of expressing theories and – perhaps most importantly – to create a sense of empathy with our ancestors, who almost certainly weren’t as different from us as we may sometimes imagine. 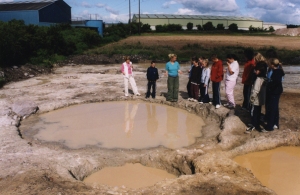 Site excavator Caitriona Gleeson shows a group of school children around the site.

The sweat-lodge reconstruction was on display until Monday 27th August as part of the Waterford Museum of Treasures ‘Bronze into Gold’ exhibition.

The NRA Scheme Monograph of the N25 Waterford Bypass is due to go to print shortly, expected for general release in 2011.