Posted on November 11, 2010 by rubiconheritage

In the second of our Remembrance Day posts, we explore the archaeological reminders of World War One that can still be seen around the Irish landscape today. The sites associated with 20th century conflict in Ireland are a forgotten archaeology, being amongst the least studied and least protected aspects of the island’s heritage.

Three Divisions left Ireland to serve in the trenches of World War One. The 10th (Irish), 16th (Irish) and 36th (Ulster) Divisions were equipped and trained on the island, in a number of military camps dotted around the country. As part of this training the men were required to not only practice trench construction, but also to spend time in them to simulate the conditions they would experience at the Front. Although many of these trench networks were built at military camps, such as the Curragh in Co. Kildare, Kilworth in Co. Cork and Finner in Co. Donegal, others were in more public spaces, such as the Phoenix Park in Dublin. One soldier of the 7th Leinster Regiment remarked during training that these trenches were not “the sort of simple hole in the ground you would imagine” (Denman 1992: 60). Many remnants of the training trenches survive today, though they have yet to be fully surveyed and archaeologically investigated. Work on these sites in the United Kingdom has revealed much about how the troops were ‘prepared’ for the horrors they would face in Gallipoli and on the Somme, providing insights into the extent to which the trenches were completed, how long men occupied them, and if they were exposed to live fire. One of the finest surviving examples in the Republic of Ireland can be seen at the Curragh, where the fields still bear scars that are more reminiscent of the Western Front than rural Co. Kildare.

The Trench Network at The Curragh Camp

Apart from the military training, Ireland also served as an important naval base during the 1914-18 war. The remains of fortifications from this period are dotted around the islands and coastline of the country. The need to counter the threat of German submarines also led to the construction of bases for aircraft- one of the most notable examples of this can be seen at the Killeagh Royal Navy Airship Station in Co. Cork. Construction on this huge base began in 1918, with Airship sheds and ancillary buildings being started before work was abandoned in 1919 due to the end of the war. Although never operational, many of these buildings survive today, including the base’s distinctive water tower. 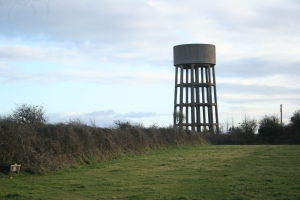 Some World War One sites are to be found in somewhat unexpected locations. A pillar with the date 1918 at the tennis club in the picturesque village of Aghada, Co. Cork hints at the former use of the site. During the war it reverberated to the sounds of flying boats and was home to a detachment of over 1,000 men of the United States Naval Air Service, who operated from this location in 1918. Although much of the base is no longer extant, remnants of the military activity survive in the shape of the American’s pier and plane slipway.

The sites associated with the Great War in Ireland are an important part of the island’s heritage. Their archaeological study would teach us much about the Irish experience of the war, both at home and abroad. It is now long past time that Ireland follows the lead of other countries in protecting and preserving some of these locations for future generations.