Caught in a Trap: Why Deer needed Suspicious Minds in Early Medieval Ireland

Posted on November 30, 2010 by rubiconheritage

Ok. This is an archaeology blog, not a musical appreciation site. Why, I hear you ask, would we feel it necessary to make reference to one of the King’s best known tracks in the title? Well, as we all know Elvis Presley was one of the greatest musicians of all time, and Suspicious Minds is one of his greatest tracks. If archaeological finds were classic hits, then the one we discovered on the floodplain of the River Lerr in Co. Kildare in 2007 was a record-breaking No. 1.

The object was discovered during excavation works in the townland of Prumplestown Lower in advance of the N9/N10 Kilcullen–Waterford Road Scheme, carried out on behalf of Kildare County Council and the National Roads Authority. Work in a waterlogged area beside the River Lerr revealed an extraordinary object; a preserved wooden animal trap, an extremely rare find in Ireland. The site was excavated by Rubicon’s Trish Long and she published her preliminary findings in an article entitled ‘To the Waters and the Wild: Ancient Hunting in Co. Kildare’ which appeared in the NRA Seminar Proceedings Monograph No.6 Dining and Dwelling (2008).  However, we have only recently obtained the all important date for the trap, allowing us to place it firmly in the Early Medieval period. 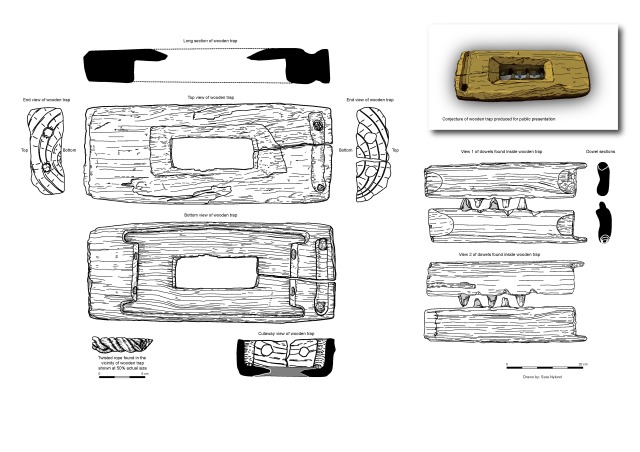 Illustration of the Tread Trap and its component parts

The trap is a uniquely well preserved and well made example of an artefact type known as a tread-trap. It is constructed of two movable pieces of oak (known as valves) which were slotted into a rectangular oak frame with a central opening. A lattice of ‘teeth’ made from animal bone were inserted into the edge of the valves, and the frame was held together with hazel rods. The trap would have been set in a pit and a tripping board placed on top of it to allow it to be sprung. The leg of any passing animal that depressed this tripping board would have activated the trap, causing the valves to snap shut and ensnare the unfortunate creature.

Upper side of Assembled Tread Trap

Pollen dating has suggested Middle Bronze Age and Iron Age dates for Scandinavian examples of traps and a Late Bronze Age date has been recovered for a trap from Drummacaladdery, Co. Donegal. More recently a Scottish example from Aberdeenshire had been radiocarbon-dated to AD 530–680 and one from Larkhill, Co. Fermanagh was dated to the mid-6th century AD. The Co. Kildare example is the first  tread-trap of its type to be found in Britain or Ireland.

The Prumplestown Lower Trap has recently returned a radiocarbon date of cal AD 660-810 (2σ) (SUERC-29034) strengthening the evidence for the use of these traps in the Early Medieval period. Carvings on an Early Medieval grave slab at Clonmacnoise, County Offaly and on a high cross at Banagher, Co. Offaly, showing a deer being trapped by the hind leg in what appears to be a tread-trap, not only tie in with the Early Medieval date but suggest that red deer were the intended quarry of these traps.

The setting of traps of this type to catch deer may also be implied by some early medieval written sources which refer to a pierced board (clár toll) in association with a deer-pit (cuitheach). Water-filled cuitheach are also mentioned in the texts. This may have served to disguise the trap close to a watering hole, and would have naturally occurred in the flood plain at Prumplestown Lower.

The trap is currently undergoing conservation at the York Archaeological Trust before its return to Ireland. It has provided us with a fascinating glimpse into the terrain and land-use of this part of Early Medieval Co. Kildare. What was in 2007 a wet corner of an arable field was clearly a point favoured by hunters over 1,000 years ago, an animal thoroughfare and watering hole where traps were set in the hope and expectation of snaring the biggest wild animal in the country. Any unsuspecting (or unsuspicious!) deer or other animal traversed this area at their peril. This remarkable survival is one of the most intriguing artefacts we have ever discovered at Rubicon, and has provided us with an opportunity to explore hunting techniques in Early Medieval Ireland, as well as pay tribute to the King of Rock ‘n’ Roll!

A Deer without a 'Suspicious Mind' finds he is 'Caught in a Trap' in Co. Kildare