Zooarchaeology Focus: Putting Flesh on the Bones of the Past

Posted on December 7, 2010 by rubiconheritage 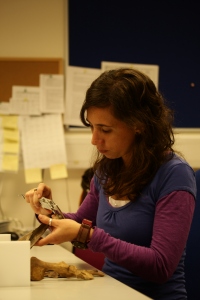 In the first of our Zooarchaeology Focus posts our faunal remains specialist Claudia Tommasino Suárez explored how analysing the age at which animals died can reveal much about how our ancestor’s utilised them. In this entry she examines how the location and type of animal bones across a site or number of sites can add both breadth and depth to our understanding of how people lived in the past.

Within most archaeological sites, we usually find that different areas were set aside to carry out different activities. One of the key markers for this is the distribution and type of animal bones recovered, which can often reflect a spatial division of work. A simple example of this was an excavation we conducted on behalf of Kildare County Council and the National Roads Authority at Prumplestown Lower in Co. Kildare. Dating to the Bronze Age, it was quickly noted that a clear division existed between the wetland and dryland portions of the site. This division allowed us to analyse the faunal remains with a focus on recording any potential contrasts between the remains from the two locations. It quickly became clear that the dryland portion of the site was the probable location of animal slaughter, as all the remains we discovered there were heads or lower limbs. In contrast, the assemblage from the wetland portion of the site contained bones from all parts of the animal skeleton, suggesting it was used as a domestic waste area. 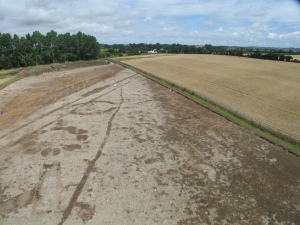 It is sometimes possible to take these divisions a step further and identify possible links between different archaeological sites in the same area. To expand on the single example above, lets now take three Early Medieval sites that were also excavated on the route of the N9/N10 at Woodlands East, Woodlands West and Hallahoise, on behalf of Kildare County Council and the National Roads Authority. Analysis of the faunal remains from these sites suggests that they may have been linked, and that some division of work may have taken place between them. The assemblage clearly indicated that a large number of animals were slaughtered at Woodlands East, while at nearby Woodlands West craftwork activities such as tanning and antler working predominated. Hallahoise exhibited the most evidence for domestic occupation, with a large amount of meat consumption taking place. The remains would suggest that in the Early Medieval period Hallahoise was where the majority of people lived, the animals were kept at Woodlands East and their remains were utilised for manufacturing at Woodlands West.

It is possible to take this yet further and suggest that animal bones cannot only be used to suggest the interaction between different sites but can provide information regarding past environments and landscapes. As an example, it was noted in the Woodlands East assemblage that pigs were frequently killed while still infants. One possible interpretation for this is that while the cattle and sheep were slaughtered to be sent to Hallahoise, the inhabitants had access to woodlands which allowed them to catch and consume wild adult pigs.

A zooarchaeologist can also draw wider conclusions on economic change through time by comparing assemblages from different periods. One such case was an excavation we conducted at Lorrha Church, Co. Tipperary on behalf of the Department of the Environment, Heritage & Local Government. The predominant meat type eaten during the earliest phase of occupation was mutton, but it would seem that as time progressed the meaty bones of this species were transported to be consumed elsewhere. This change may indicate a move from initial local consumption to trading mutton or lamb, with the remaining bones being used for local craftworking.

Faunal remains analysis has the capacity to inform us not only about different activities within a site, but also to suggest possible links across different settlements and even regions. It also provides us with depth in time; economic changes through decades, centuries and even millenia are often most clearly identified through analysis of faunal remains. More evidence (as if it was needed!) of the vital role played by faunal remains in the interpretation and analysis of archaeological sites.