Posted on December 21, 2010 by rubiconheritage

Dunbrody Abbey is situated approximately 12 kilometres south of New Ross, Co. Wexford and is one of the most picturesque of Irish religious houses. This Cistercian abbey was founded by Hervey de Montmorency in the closing decades of the twelfth century. Although the Cistercians were present in Ireland from the 1140s, there was a fresh wave of foundations following the arrival of the Anglo-Normans into Ireland, and Dunbrody was among them. Cistercians wore white robes and were often known as ‘White Monks’. They aimed to live their lives in the same way as the 6thcentury St. Benedict, with an emphasis on manual labour. Their abbey at Dunbrody was in religious use for more than three hundred years, and its history shows that it remained firmly attached to the Anglo-Norman colony that was established in Ireland after 1169. The monastery was suppressed by the English Crown in 1537, as part of Henry VIII’s ‘dissolution of the monasteries’. 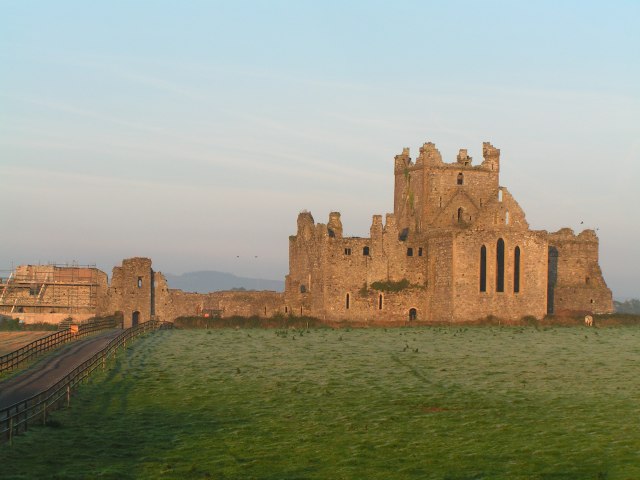 We were privileged to get the opportunity to carry out some exploratory excavations in the abbey in 2007. Our excavations centred on the cloister, the east claustral range and the site of the kitchen. The word cloister is latin for ‘enclosure’, and they generally consisted of a rectangular open space, usually surrounded by covered walkways. 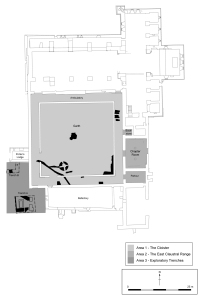 Areas of excavation at Dunbrody Abbey

During the course of our work we investigated a remarkable circular stone structure which was located in the cloister garth (the garden or open part of the cloister) adjacent to the doorway to the refectory where the monks had their meals. This circular structure was identified as a lavabo, a communal, ritual washing place. Lavabo means ‘I will wash’, and before each meal the monks would do exactly that in the lavabo fountain. However, as with everything in monastic life, the lavabo was steeped in ritual and was intended to cleanse the soul more so than the body. An important weekly ritual, the mandatum, required a symbolic washing of the brethren’s feet. This ritual was intended to remind the monks of Christ washing the feet of the apostles before the last supper – a good dose of humility! To reinforce this the Abbot (the absolute ruler of the Abbey) washed the feet of twelve of the monks each year on Maundy Thursday. Unfortunately this attempt at keeping the abbot grounded tended to fail miserably, and many medieval abbots were living proof of Lord Acton’s famous quote that ‘absolute power corrupts absolutely’.

The lavabo under excavation

Although only the fragmentary foundations of the lavabo survived, a combination of comparative studies of similar structures throughout Europe and the skill of the graphics department at Rubicon has allowed a possible reconstruction to be attempted of the Dunbrody example. The surviving evidence consists of a circular stone structure with four stone lined channels emanating from the centre. One of these fed into a stone box drain, although the others may have had similar drains for which no evidence survives. In addition two lengths of lead pipe were recovered adjacent to the structure. The superstructure is totally lost so all suggestions as to its form are purely conjectural. However certain structural elements are required for a lavabo to serve its purpose. At least one basin is necessary, although the majority were constructed of two basins of different sizes. The smaller basin was placed above the larger in order to allow water to flow from one to the other. The second critical element is a water supply. At Mellifont Abbey traces of lead were identified in channels in the stone work, and these are believed to have been derived from the central fountain of the lavabo. The surviving (and still functioning) lavabo at Le Thoronet in France has a series of spouts around the circumference of the upper basin. A similar arrangement may have been present in the Dunbrody example. 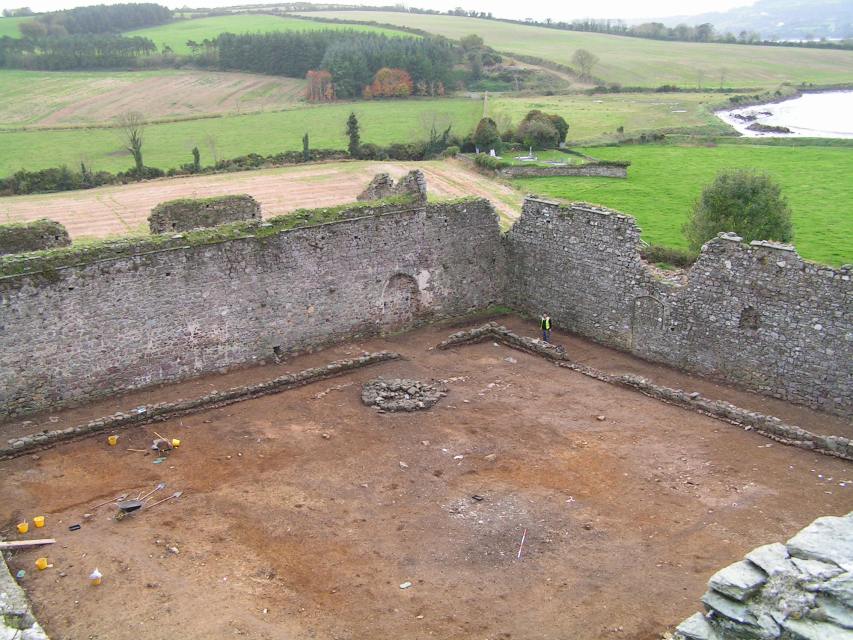 The cloister garth under excavation; the circular lavabo can be seen beside the walkway

Reconstruction of how the lavabo may have functioned

Therefore the most likely form would have consisted of a large circular basin with an internal fountain. This would have been fed via lead pipes with a gravity feed from a reservoir held in the upper levels of the complex, possibly on the roof of one of the claustral ranges. If the basin sat directly on the surviving foundation the four gaps would have provided covered drainage which in turn fed into the surrounding box drain network. The basin could have been built of either wood or stone, although considering the amount of stone used in other areas of the abbey and the highly visible location of the lavabo, stone would seem the most likely. The central fountain was probably also constructed using wood or stone, and held lead pipes supplying the water to one or more taps. The lead piping found adjacent to the structure would support this hypothesis.

It is quite amazing to think that in the 13th century, when the majority of people in Ireland were living in single roomed mud-walled houses, that this monkish community had an ornate stone building for washing their hands and feet, supplied with an advanced plumbing system. 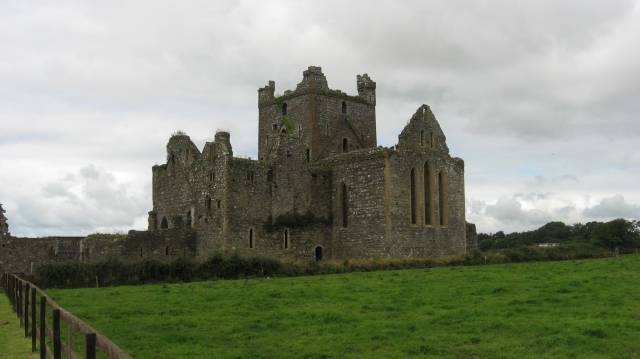