Happy Imbolg! A Mysterious Festival in the Celtic Calendar

Posted on February 1, 2011 by rubiconheritage 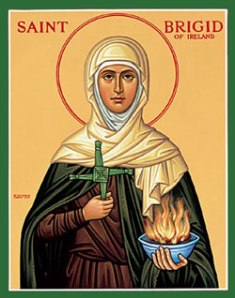 St. Brigid or the Goddess Brigit

Imbolg falls on the first week of February. The Celtic calendar had two principal festivals, Samhain in November and Bealtaine in May. Separating these two main festivals were two lesser celebrations, Imbolg (in February) and Lugnasad (in August). Of all of these seasonal festivals we know the least about Imbolg. It is believed to mark the beginning of lactation in ewes and it corresponds with the Feast of St. Bridget in the Christian Calendar. It seems most likely that the feast was a celebration of fertility which coincided with the end of winter and the beginning of spring and new life. 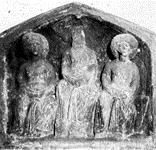 Would the real Brigit please stand up?

It is also believed in some quarters that St Bridget was a Christianised version of a Celtic fertility god, Brigit, who was the daughter of one the principal Celtic gods, the Dagda. She is supposed to have had particular attributes in the fields of learning and healing. Brigit had two sisters, both of whom were also imaginatively called Brigit! This would appear to relate to a trend common amongst Celtic deities where they appear in triplicate. Triad Goddesses appear in numerous Romano-British sculptures in Britain, where it may indicate that the Romans adopted some of the local deities as their own. 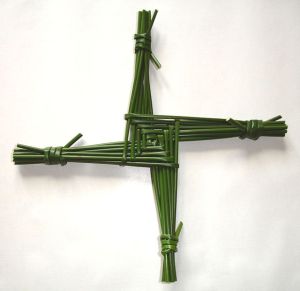 Brigit’s name can also be detected in numerous place names on continental Europe which suggests that she was part of ritual practice across the Celtic world. The Brigantes, a Celtic tribe in Britain, worshipped the goddess Briganti, who some authors also link with Brigit.

So if your kids are making their St. Bridget’s Cross this week, spare a thought for your pre-Christian ancestors and what they might have been getting up to at this time of the year!

2 Responses to Happy Imbolg! A Mysterious Festival in the Celtic Calendar